This is about breaking down stereotypes:

Miss C would be a 24 caliber hippie-hopping rhapsody of an emcee. W/ a DJ at her side, shakin hip hop higher than high. Open up & heard from the grape vines of KS spoken word spun beats, sung choruses and leads, she's got a message to breed

Emcee Miss C takes over the microphone with a motivational, educational and confrontational style. Breaking down real issues with real substance, rhymes and raps include topics such as sex, solidarity and startin' the revolution, above all. Influenced by the honorable Jurassic 5 and Ani Difranco, to name a few, put those two together and you get one hell of a misconception.

Love doesn’t just sit there, like a stone; it has to be made, like bread, remade all the time, made new.
–Ursula K. Le Guin

What do we do with a hardened heart?

Tonight was Shavuot – a Jewish holiday where we review the whole Torah, but through new lenses. A quick Google search turns up pictures of wheat fields for Shavuot, which symbolize the Harvest of the land of Israel, the day when the Jewish people were given the 10 Commandments. Buried in the golden symbolism of this holiday lay some deep seeded reflections concerning namely, our hearts. And lately, my heart has been hard.

I used to think love was enough.. that with enough love and good intentions, you could over come any trial or misunderstanding. I used to put more optimism into LOVE than into the doing of the actual “work” in love itself, but as it turns out, you cannot force love. No, “love, like bread, must be made every day” (or like challah, every week if you’re Jewish).

Now it takes a LOT of hard work to even make dough… I mean how many of us have worked the fields, harvested the grain, turned grain into flour? Then there’s the combining of the ingredients, patience for them to rise to just the right combination of measurements and temperatures curated to ensure the bread is even edible. So many factors and variables… and just like in our relationships, we must work at keeping the bread alive, constantly in the home, remaking it anew. A ritual, even!

Now, while man plans… Ingredients change. Oven temperatures may vary, yeast evolves and new recipes are written; all along we adapt our process. Cut corners. Shift in dies and as we get older, our hearts change. Love is always there, but it can hide, even from ourselves. Love does not exist in a vacuum, but rather it is surrounded by forces of nature that ebb and flow, pulling our hearts and minds sometimes in opposite directions sometimes. Unlike mana, there is no exact method or science for why hearts are hardened, or not. Layers build, and callous without constant maintenance.

SO – when I looked at my Torah portion tonight called: Bo, I was reminded of stories of the plagues of Egypt, the anguish, the frustration, the hurt that for years so many people even to this day continue to endure, I asked myself, “what DO we do with hardened hearts?” When people are SO angry that they cannot forgive, forget, or give in, where do we go from there? When Pharaoh hardened his heart for the final three times, what hatred that brought out, what misery? What good came out of that, God? Yes, we may have received the commandments and we will forever forward observe this Passover counting of the Omer culmination in celebration, a mitzvah yes, but not without years of hardship and difficulty. How could anyone’s heart NOT be hardened right now, under these circumstances?

And thus, I must look at what I have learned from my many mistakes made in love, and I find that no matter how hard we try, we cannot force a softened heart. Only that is between God and the heart itself. We can work out our own hearts, showing forgiving our own souls but also, finding grace for who have hardened hearts, even when it may not feel rightfully deserved. The hardening and softening of hearts, that is left to God. And when God is everywhere, as I was taught by my parents, it’s up to each of us to do the work. To take the time. To soften our hearts. To bake the bread new. To knead the truth. To re-read the stories, with fresh lenses so that we can keep gleaning wisdom, even, and especially, when the bread turns stale.

Stale bread … used to be for the birds. But opening and reopening our hearts, that is for our people, and everyday we work it. Love, like bread, can go stale, and can be bought back to life. – you can freshen it up with a little heat, or dry it out and make croutons. Starter yeast has probiotic health benefits, and we learn that even from the sourest of dough, love can grow, into a new culture if we can cut through the tough outer later with knives of justice, in order to enjoy the warm parts. Even when matzah didn’t get the chance to rise, we still ate it up, and made ourselves strong. We keep nourishing ourselves, even when it’s tough, because sometimes love isn’t enough to survive.

In this time of modern day plague and uncertainty, we can be grateful that so many of us even have the time to learn how to bake bread, as well as the time to have had the difficult conversations with our loved ones about how to properly love our neighbors. All the while, continuing to work on our own hearts so that they may be as soft and open as our nature will allow.

Every since I was a little girl, I felt quite “spiritual”.  I remember reading the book Conversations with God when I was about 10, and was super inspired!  I thought spiritual was “normal”.  “Everyone feels like this, right?”

Truth is, I also believed in Santa Clause until I was about five, even though my parents raised me essentially Jewish. They always gave me a choice though.  You see, my mothers’ mother was Catholic, and she was the most devout, faithful person I knew, going to Church religiously, and making these  holy days very special for us grand-kids.  Even though the whole rest of the family was Jewish, and I was Jew-ish, I remember always admiring her strength in her own spirituality.  I never once questioned my own center of belief, and I knew that the spiritual inkling inside of me, even at five-years-old, was sacred. 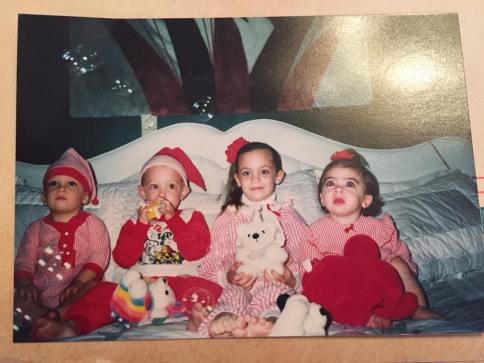 My father broke the news about Santa that Christmas eve, explaining that it wouldn’t make any sense to the kids at the Jewish Day school I attended if I started talking about Santa.  Broken heartedly, I agreed.

Growing up, my parents taught me that God is everywhere; we are all God and God is inside of us. I learned later in life about a Kabbalah concept: “God is a Verb”.  I discovered that in a magical book, that jumped out of my Rabbi’s shelf and info my psyche almost ten years ago.  What a blessing to find all of these concepts and ideas about spiritutalty swimming around in my mind, inside a book!  A Jewish book, none-the-less.

Facts: Judaism is built on three pillars: Torah, Study and Acts of Loving Kindness.  When you do a good deed, or a mitzvah, it’s considered a holy act.  Doing an anonymous holy act is one of the greatest mitzvot one can do.  (Side note: having sex on the Sabbath is considered THE holiest act possible.  At least the Jews had some things right.)

Now, despite my very intense relationship with Judaism, I’ve always loved Christmas time, even though in my core, I am a Jew.  I was raised Jewish, I speak Hebrew, I’ve worked at a synagogue for ten years, I’ve been to Israel and my dad keeps Kosher.  Though some extremely religious people would tell me I need to convert, I laugh to myself because I know in my core, I am what I am, what I have always been, and that is love.

Every year, holiday cheer always brightens me up inside, especially during these dark winter days, because it is a time for our families to come together and cherish one another.  It’s a time to pause, reflect and give thanks for these precious experiences.  It’s a time to celebrate light, even in the dark.  Though for some, undoubtedly, the holidays can be a very rough and depressing time.

I have a theory about spirituality and ‘religion’; it’s really all about nostalgia.  If you have a strong fond memory of holiday times with your family as a younger person, then chances are you really like this time of year as an adult, because it reminds you of those happy memories.  If you didn’t much like your family, or your Church much as a kid, then chances are Christmas time makes you gag, and that’s okay, too.

Whatever these times mean for you, I do hope you will choose to spend time with people you care about.  If you’re alone, then cherish that sacred time to reflect, ground, center and embrace your place in life.  With our worlds spinning so fast and chaotically, a moment of quiet can be a true gift.
Though I still can’t really explain my faith, I enjoy every minute of it. I enjoy the woven stories we tell, learning about our histories and how they relate.

Here is a fine example of three different stories, each holding their own special meaning and traditions.  Enjoy!

I am often presented with the imminent wonderings of… “hey…. you’re Jewish!  How does it feel!?! …. I’ve always wanted to take to a Jewish person about Judaism…I knew a Jew once….”

My response: “Awesome, I LOVE the Jews!  YES Let’s talk about  being Jewish… it’s.  It’s wonderful.  It’s everything.  It’s… I got nothing”

“So like… do you believe in heaven or hell?” is usually the next question I get.