This is about breaking down stereotypes:

Miss C would be a 24 caliber hippie-hopping rhapsody of an emcee. W/ a DJ at her side, shakin hip hop higher than high. Open up & heard from the grape vines of KS spoken word spun beats, sung choruses and leads, she's got a message to breed

Emcee Miss C takes over the microphone with a motivational, educational and confrontational style. Breaking down real issues with real substance, rhymes and raps include topics such as sex, solidarity and startin' the revolution, above all. Influenced by the honorable Jurassic 5 and Ani Difranco, to name a few, put those two together and you get one hell of a misconception.

When the August 2016 “1,000-Year-Flood“ hit the state of Louisiana, no one could have known the extent of the damage that 29 inches of rain in 48 hours would do.  Rivers crested, water backup up, and in turn thousands of people were left homeless, with little to no end in sight to correct the mass amount of wreckage.

More than $8 million dollars and two months later, 20 out of the 64 hit parishes in Louisiana are still under a state of emergency, and one particular town, Denham Springs, still has a very long way to go.  Standing water continues to surrounds some buildings.  Caskets that were unearthed are slowly being reburied.  Grocery stores are still trying to reopen.  It’s a huge work in progress for the community, and their cry for help was heard by few.

Enter, the Life Church in Walker, La, who has opened their arms and doors to help with the cleanup, and community support.  Not only did the Life Church offer their sanctuary and building as a temporary place of refuge for flood victims, but they also immediately turned their gym into a distribution center, and for several months this community made it their mission to distribute and facilitate the distribution of all kinds of food, goods, clothing and appliances. 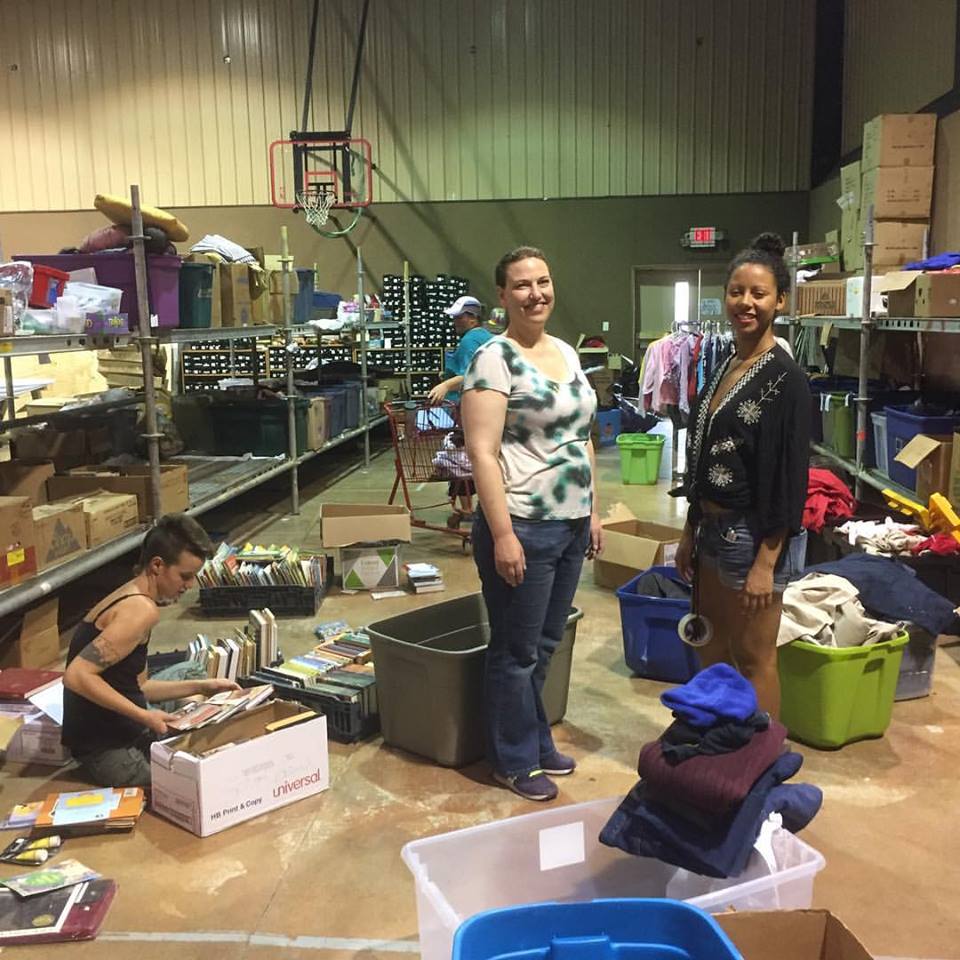 As fate would have it, a group of Burning Man activists, we will call them ‘burners’, also heard the call that there was work to do in Louisiana, and thus began a symbiotic relationship between a Burning Man Project volunteer group: Burners Without Borders Louisiana Flood Relief and the Walker Life Church.  Burners Without Borders (BWB) started as an off-shoot of the Burning Man global community in 2005 during Hurricane Katrina, and recently joined into the new 501c3 Burning Man Project.  Different projects and chapters often pop up in times of need or crisis to do volunteer work in whatever capacity they are needed in various cities.  This particular group, made up of mostly Louisiana and Illinois burners gathered in Walker, LA at the Life Church to put together a team and go out into the field.  The likelihood of all of these specific people coming together was very special, especially considering that there is a .001% chance of this type of catastrophe happening, hence which it was named the “1,000-Year-Flood”.

The Life Church took to the BWB Louisiana Flood Relief community instantly, both groups priding themselves on being radically inclusive and self-reliant.  Burner volunteers staying at the Church took to helping Denham Springs community members with specific projects, such as cleaning up abandoned homes, hanging insulation, cleaning up lots and other projects.

Additionally, an affiliated mardi gras group out of New Orleans called Krewe Ulysses began cooking 200+ meals every Sunday using the Life Church’s commercial kitchen.  Krewe Ulysses and other burners then would go out ‘into the field’ to distribute these meals and other supplies such as baby food, diapers, bottled water, and any other requests from those in need. Relationships were formed, and this work became very meaningful, for everyone involved.

“Part of our job includes just talking to the people, helping them process and tell their story, so that they feel better emotionally…because they know they are cared for more than they even knew”, said Daniel Cappy, the founding logistics coordinator of the Burners Without Borders Louisiana flood relief project.

In particular, two neighborhoods had the most devastation, that being Magnolia Spings and Eastover.  Specifically the challenges that community members faced included house demolishing, removing debris, and ensuring that FEMA would be scheduled to haul away said debris before it turned hazardous.  Taking care of their families was another added challenge un top of all the rebuilding.

The biggest challenge: unattended piles of debris which often contain black mold and other dangerous materials that increase in toxicity after sitting for too long.  Often the residents would take to burning the piles in order to remove them, which led to even worse air quality and pollution in the neighborhoods.  “It truly looks like a refuge camp,” said Nikki, a Burner volunteer. 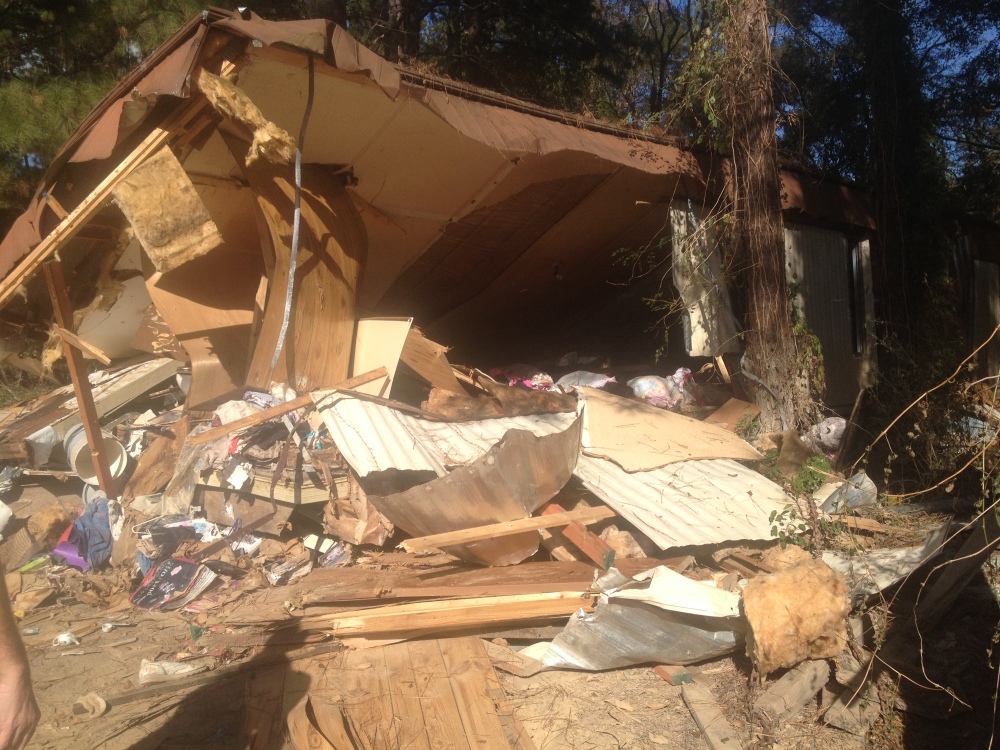 Life Church community member Duran estimates that about 35% of the work has been done as far as getting ‘back to normal’.

“I remember when the rain began…there was shock everywhere.  People running for their lives with clothes on their back. It came almost like a monster.  The rain went in circles, tributaries began to over flow and there was no downstream to match the upstream.  The Mississippi river had been at it’s crest since June, so there was nowhere for the water to go.  The divider walls on the interstate that the government just installed kept the water backed up,” said Duran during an interview at Life Church.  Duran thinks that the underlying problem not being addressed by authorities is the drainage system in Baton Rouge.

“You don’t get over this in a month or two,” Duran says, disheartened.  “People are trying to get back to normal and it’s going to take at least a year, and that’s pushing it.”  Duran got lucky in that he says he learned a lot from Katrina.  Not everyone paid as close attention.

Danielle from Eastwood had her new-born daughter taken away after the storm hit because she didn’t have a proper home in which to keep the young child.  The child is now in critical condition in the hospital, and Danielle is not allowed to stay with her.  While raising her other children and living with friends/family, she along with the Life Church and Burners Without Borders crew, made it a priority to clear the old wreckage in her lot and make space for the new FEMA trailer to come in.

Miss Tina, another flood victim story, woke up in the middle of the flood with the water surrounding her bed up to the mattress and no one had come to get her.  She lost her life’s work, her car and her house in the storm.  To be eligible for her new FEMA trailer, she herself had to crawl up in the trees to cut down branches with a hand saw in order to meet regulations.  All that work and she’s still waiting on her trailer.

Duran, while he lost all of his clothes and possessions, he also is dealing with a legal battle, trying to get his car back from the repair shop that it was parked in when the storm hit.  Since the shop was closed for weeks after the storm, the store is now trying to charge him an outrageous ‘storage fee’ for having keep the car during the flood.  The politics so many are dealing with in order to get their lives back are increasingly difficult, which makes moving forward a huge challenge.

Many are still in hotels while they wait for their insurance checks, or for a new game plan if they didn’t have proper coverage. An elderly man, James, is another example of being a victim of an unfair circumstance.  His whole trailer had black mold up to the water line.  FEMA gave him $25,000 but the contractor he used took $15,000 of the money and then disappeared.  He’s now living in a hotel and has been scared to move forward with the rest of his money, which still isn’t enough to fix all the damage.

Most people in Denham Springs and other counties think that FEMA and the Red Cross are not doing their jobs properly according to Duran.  He explained that the most FEMA will give out is $33,000 to fix your home, and most houses need at least $100,000 to fix the damage that’s been done.  The Red Cross appears to have people on the ground, but they are charging the government $8.50 a plate to feed thousands of people, according to the Life Church. That’s why the Life Church decided to feed people themselves, out of pocket.  They got very lucky in missing the water, and are trying to give back what they can.

When the rain started on August 12th and didn’t stop for three days, the Life Church was very afraid.  “The waters came up to within feet of our Church, but it didn’t flood,” said Paster Val of the Church, who is so grateful to have been able to provide a safe space for people to refuge.

The distribution center has just been closed in the last two weeks, and the needs of flood victims have shifted from personal items and food to specifically needing help rebuilding their homes.  Burners Without Borders volunteers reported that there are not enough construction workers in the area to complete the amount of work there is to do in a timely fashion.  There is only so much volunteering you can offer, and with the mortgage companies involved, licensed contractors must be employed to further repairs.

Bottom line, if people have the skills and are able to travel to  Louisiana or the Carolinas, they are badly needed.  At this point having a license to work construction is a strong asset, but not necessary.  If you want more information on how to help with the flood relief, or to donate to Burners Without Borders Flood Relief, please contact Burners Without Borders Flood Relief at: Bwblouisiana@gmail.com

“Never think it can’t happen to you,” said Duran. “If this experience has taught me anything, it’s that it is so important to take care of your neighbors.”